THE CURSE OF SUMMER HAIRCUTS

OMG! Summer is officially here.  That explains the 98-degree heat and the 95% humidity. It also may explain the air conditioning bill and why walking from the house to the car is like a stroll through Hell on a particularly humid day.  I must take steps to address this:

1. Shave the dog so she’ll stay cool in the heat.

2. Go up into the attic and remove all of that stifling insulation.  Maybe pull some of the

shingles off the roof, cut a vent, let the place catch a breeze.

3. Take off all my clothes and throw away that SPF 1200 sunscreen to unleash the cooling  force

of my sweat glands.

Done! I feel cooler already and the dog is certainly looking interesting, though not necessarily like a dog.  Off to the beach!

This is not working out exactly as planned. Why?

It is about a bazillion degrees hotter in the living room than before I removed the insulation and I can no longer use the couch since that unexpected summer thunderstorm appeared directly over the ventilation hole I chopped in the roof.  21/2 inches of rain in 18 minutes followed by hail the size of golf balls. Sheesh! Maybe there’s something to that Climate Change thing after all.

Also: The dog and I look like we have been tanning on the surface of Jupiter. All those places where she used to have luxurious hair are now bright red and my own skull looks like I am Billy Idol except the white hair is actually folds of dead, crisp skin.  I am considering putting clothes back on except it is too painful to do so. Have slathered myself in unguents (SPF 20,000). I’d go up on the roof to cover the hole but fear neighbors will call police. 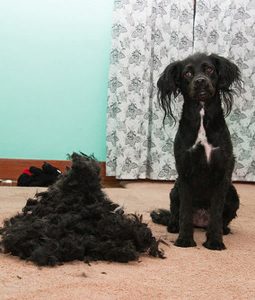 The dog refuses to come out of her crate or look at me. If I try to pet her she growls or runs away.  How was I to know that giving my dog a summer haircut actually reduces her ability to stay cool? I guess this is like that attic thing, why they call it insulation.  When my vet and his staff appeared at the door last night for the intervention (also to beg me to put on some clothes) they said that dogs shed exactly the right amount of hair to keep them cool (geniuses! How do they know?) and all we have to do is brush out that dead hair.

Am able to put clothes on again at last. Blue tarp on roof.

Not such good news for the dog, though.  Her undercoat came back in pretty much okay but her once gorgeous outer coat looks like moths have been nesting in it.  Veterinarian says this is about as good as it’s going to get. Also called me unprintable name, questioned my intelligence.  Can hardly wait till fall.  May have to add hair to dog. 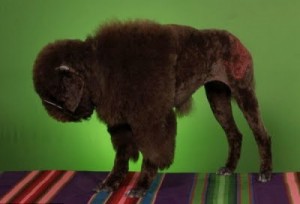 I BLOG THEREFORE I WOOF

“I blog, therefore I am.”- Discardes

As far as I can tell there is no great hue and cry for another blog by another dog trainer, let alone one pretty much unknown beyond New Orleans. That being said, my Upward Dog Training & Counseling facebook page has its devotees, and I have found that longer-form “status” reports (like a recent one on dog costume parades) are unwieldy in the facebook format. So blog I will. I will blog about dogs, since dogs are all I’m pretty sure about in this crazy mixed-up world. 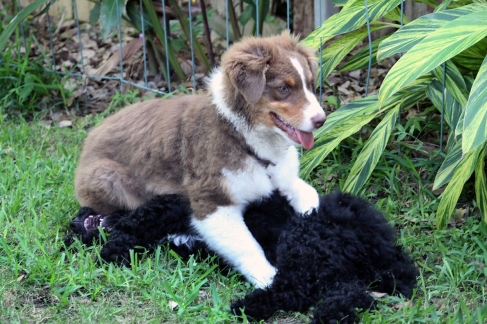 Of course one can’t write about dogs alone.  I’ve had any number of clients say to me “I wish I could work with dogs instead of people.” They usually add “Ha Ha.” The fact is that in most cases dogs come with their people attached.  This is a Good Thing. It is the basis for the very existence of the domestic dog.

Domestic dogs exist because we exist. Nobody is really sure how or exactly when domestication took place, but it generally agreed that it was at least 10,000 years ago that the wild canines who became our modern dogs trotted off in an altogether different and far more people friendly direction than the wild canines who stuck to the old tried and true and became the modern wolf. To this day wolves don’t much like people (who would blame them?) but the entire evolutionary survival strategy of dogs depends upon people, much like the survival strategy of, say, Blanche Dubois. And while some people can apparently exist quite contentedly without a dog, a dog without a person is left in an unnatural and perilous state. 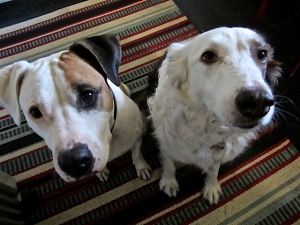 If you doubt the truth of this, pop over to your local animal shelter on any given day. You will see rows upon rows of unwanted and abandoned dogs whose fundamental social contract with people has been betrayed by people, as often through ignorance as cruelty.

I first learned about modern dog training based upon science in 2005, through the writing of Jean Donaldson. Jean’s book “The Culture Clash” both opened my eyes to an understanding of dog behavior free of unsubstantiated assertions and anthropomorphic conceits, and reaffirmed a revelation I’d experienced while observing my Late Lamented hippie dog, Friday, while high as a kite (me, not the dog) in Berkeley in the summer of 1969.  44 years later I can clearly see Friday in my mind’s eye, a shy, medium sized retriever mix with glossy long red fur.  I’d paid five bucks for her at the local shelter. She was alternately approaching and retreating from a piece of life-sized humanoid sculpture on a friend’s deck, clearly without a clue to what it was, or whether it was a threat to her. She would stretch her body and neck toward it, sniffing the air and staring fixedly at it, retreating at any sound from the woods around us then sneaking back again.  She was very serious about this, safety and survival being serious business.

It was at that moment that I saw my Real Dog clearly for the first time and realized that this was how she judged every situation; by how it affected her.  I can’t describe exactly why this had such an impact on me (maybe you knew this all along) but it stayed with me all through Friday’s long life, and through the lives of a number of subsequent epic and long-lived dogs in my life until I picked up “The Culture Clash” and read amongst Jean’s “Top Ten Things We Know About Real Dogs”: # 2.  Amoral (no right vs. wrong, only safe vs. dangerous).”

There it was! There was my Real Dog approaching & avoiding the statue on the deck with no interest whatsoever in how it was affecting me.  Lassie was officially dead – long live the Real Dog!

Two years later I graduated with a Certificate in Training & Counseling from The Academy for Dog Trainers in San Francisco, where I’d spent a couple of grueling months under the penetrating intelligence (and eyes) of Jean Donaldson and some of the other best trainers & behavior experts in the world.  I’d spent every penny I had on The Academy and living for two months in San Francisco with my dog, Molly (Upward Dog’s Mascot in Eternity).  I had to borrow money to get home to New Orleans, and hit the ground running by necessity. I trained 5 classes a week for the LA-SPCA and took on private clients as soon as the word got out that I was available.  Since then it’s been all dogs, and learning about dogs, all the time.

So I figure I’ll blog about dogs; what they are and what they need and need to know and how we can better serve and grow our ages long relationship with them, the things we do and don’t do that imperil them, our wrongheaded ideas about them & great ideas that shine the light in those shadowy corners, dispelling myth and misunderstanding etc. They exist, after all, because we exist. We owe them at least that much.